What can you do when running away from difficulties isn’t an option? Sit with your discomfort & try to learn something: http://firstdaypress.org/standing-still/.

Today my article “Start Bending Over Backwards for Yourself” appears in The Indie Chicks. I’m excited to be part of a magazine with a mission to inspire women to become “self-empowered, driven, independent, and confident.”

This topic–how to find your voice, believe in your own convictions, and realize you don’t owe anyone anything–is something I’ve struggled with throughout my life. I’m finally making progress but it’s something I have to remind myself every day. To celebrate the publication of this article, here is a story about the dangers of bending over backwards to please others with your writing.

By the time I went off to earn my MFA in Creative Writing, I had written a first draft of a novel. I had big dreams for this novel, not least of all that I would work on it during my two years in the program, turn in a brilliant final draft as my thesis project, and field offers from agents before the ink was dry on my diploma.

I wasted no time in submitting the first chapter when my turn in workshop came. The following week I received twelve written critiques of my manuscript, including the professor’s. It was a little overwhelming to absorb twelve different takes on one chapter, as well as twelve different sets of suggestions on how it should be changed, but I was eager to get to work and eager to please. I rewrote the chapter to incorporate all of my classmates’ opinions as best I could. Then I submitted the revised chapter to workshop. But the problem with trying to please my readers in a class where critiquing was not optional but homework, was that they were never pleased. Each new revision yielded me twelve new sets of comments.

I’m sure you can imagine what happened to that chapter. It was like a quilt, once thick and purposely patterned, that suffered too many changes until it grew threadbare and asymetrical. In short, I let the workshop run away with my novel. By the time I stopped submitting chapters, I hardly recognized the story I held in my hands.

Having learned this lesson in my first semester, I put my novel away until the following year, when I began a one-on-one “tutorial” with one of my professors. This, I thought, was my golden opportunity. Twelve readers had been too many but one smart and supportive reader would be just what I needed to finish my book. As the fall approached, visions of book contracts once again danced in my head.

Can you guess what happened next? There was no book contract. There wasn’t even a finished novel. After much debate over what kind of people the characters should be and what they should be trying to do with their lives (i.e. the plot), after lots of frantic re-writing as I tried to please my professor, whose suggestions and expectations began to feel like a moving target, he said, “This isn’t my book. I’m not writing it or trying to get it published. I don’t care what happens.” His point, I eventually realized, was that it was my book. I needed to have a vision for it, a vision I was committed to. The ability to receive constructive criticism, to be open to suggestions, isn’t valuable unless it’s accompanied by discernment.

Four years later, I am much more confident in my writing voice and my vision for my stories. Workshops are more useful now that I can take the comments that help me realize the story I intended to write and leave the rest in the recycling bin. “It’s my story” was one of the best lessons I learned in graduate school. 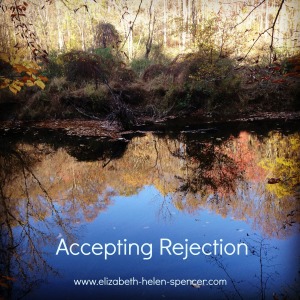 After being lucky enough to have a great freelance writing project fall into my lap last spring, I’ve started to look for more work. The most fun part of this process is brainstorming ideas. I get a lot of ideas while I’m driving, and there’s nothing like cruising along the highway, basking in one’s sure-to-be-genius stories and blog posts. The hardest part is, of course, actually writing those stories and blog posts. And the worst part of the process? That’s right, it’s everyone’s least favorite friend, rejection.

Rejection happens to everyone

Long before I submitted my first story to a literary journal, I was well-versed in rejection. From losing a friend to a cooler crowd, to not being selected as the 5th grade choral soloist for “Somewhere Over the Rainbow,” and experiencing plenty of romantic rejection in high school and college, you might say I was a pro. But when it came to dealing with rejection, I was very much an amateur. I wallowed, I internalized, I held on way too long to what I wanted and didn’t see the many other possibilities in front of me. When I lived in the world as I wanted it to be, instead of as it actually was, I denied myself the opportunity to learn, grow, and work toward achieving my dreams.

Handling rejection gracefully is about knowing yourself

When I was younger, I didn’t know myself at all. That’s why I was trying out for chorus solos instead of writing stories. I wanted to fit in and be loved, so I tried to present myself in the image of the people I wanted as friends and dates. Finally, after three years of college I majored in English, but even then I didn’t have strong convictions about being a writer. My head was easily turned by different career ideas. I didn’t believe I could succeed or make a living as a writer, so I tried to do lots of other things. Fear guided my actions. I went to graduate school for creative writing, but let the criticism of classmates and professors unravel my novel-in-progress.

Only now, at 31, am I ready to say with conviction: “I’m a writer.” Whether I succeed or fail isn’t the most important thing. Satisfaction comes from knowing that I’m pursuing my dream. I’m putting myself out there and I’m going to give it my best effort.

Shake it off and move on

Now that I know myself, I’m not dependent on external praise or criticism to form my self-image. Whether others like what I’m doing, hate it, or are indifferent, my belief in myself doesn’t waver. That isn’t to say that rejection doesn’t still sting–of course it does. Everyone would rather hear “you’re awesome” than “you’re not what we’re looking for.” But I don’t take it personally. After all, do I like every book I read, every song I hear, or every person I meet? Of course not. Taste is subjective. So I recover from one rejection by moving on to another submission. What one editor doesn’t care for, another will want to publish. And any response from an editor, good or bad, is a sign that I’m out there, participating in the world I want to be part of. That’s definitely something to be excited about!