Some of my favorite bloggers and podcasters, including Beth and Sarah of The Nuanced Life, have been talking about the importance of daily rituals. They help us slow down and appreciate a moment, mark the passage of time, and inject a special feeling into daily routines. In this post I’ll talk about the 2 simple rituals I recently implemented to start my work day.

Much has been written about the writer’s struggle to “stay in the chair.” A writer I used to know even signed his emails with a quote from French philosopher Blaise Pascal: “All of humanity’s problems stem from man’s inability to sit quietly in a room alone.”

Of course, this struggle extends to other professions, too. For example, I’ve noticed the human impulse for distraction while supervising my daughter’s piano practice. Yes, she is only four, but one of my takeaways from parenting toddlers is that they really aren’t that different from adults. We grown-ups have all the same emotions and urges; we are just better at repressing, delaying, or lying about them. So when my daughter sits on the piano bench, I see myself at my desk. She fidgets, looks for objects in the room to focus on instead, asks if she can make up her own song rather than practice the assigned ones. As she finishes a measure or a song, we pause for a beat. I coax her to keep going when she wants to be done already. These practice sessions last a mere 10-15 minutes but they’ve been very illustrative for me.

When I sit down to work each day, one or all of these things usually happen:

It’s easier to keep someone else on track (i.e. a child at the piano) than to police yourself. The mind can be very wily, making us think we are not procrastinating but taking care of something that Really And Truly Needs To Be Done. To counter the distraction impulse, I’ve started two easy and quick rituals that tell my brain, “get your butt in the chair and focus. Everything else can wait.” I once read that Joyce Carol Oates rewards herself for a morning of writing with housework and I totally get it. Sometimes a mindless physical task is the perfect refresher after hours of sustained mental focus.

Ritual One: Turn on the essential oil diffuser.

A friend gave me an extra aromatherapy kit she’d received as a gift. It came with one diffuser and two bottles of essential oil. I use the Grapefruit scent, which supposedly promotes energy, to start my work session. Plugging in the diffuser, pouring the water, and counting the drops of oil help my mind get focused. The nice scent adds that special feeling to my workday. Does it actually make me energized? I have no idea. Ask me again when my kids are actually sleeping through the night.

I like to listen to classical music while I write; it makes me feel “smart” and focused. After exploring different composers and playlists through Amazon’s Music Unlimited feature, I’ve settled on the album “99 Must-Have Piano Masterpieces.” It’s long enough to last through writing sessions of various lengths and it begins with Beethoven’s Piano Sonata No. 14. Something about the opening notes of that piece imbue me with a sense of gravity and purpose, so that whatever I’m working on next, even the most mundane writing task, can make me feel like Tolstoy composing War and Peace. And really, that’s how we should approach anything we do because your work is that important to someone: your boss, client, or customer. The care you’ve put into it will show in the final product.

Do you have rituals or habits that help you ward off distraction and procrastination? I always love to hear other people’s tips and hacks. 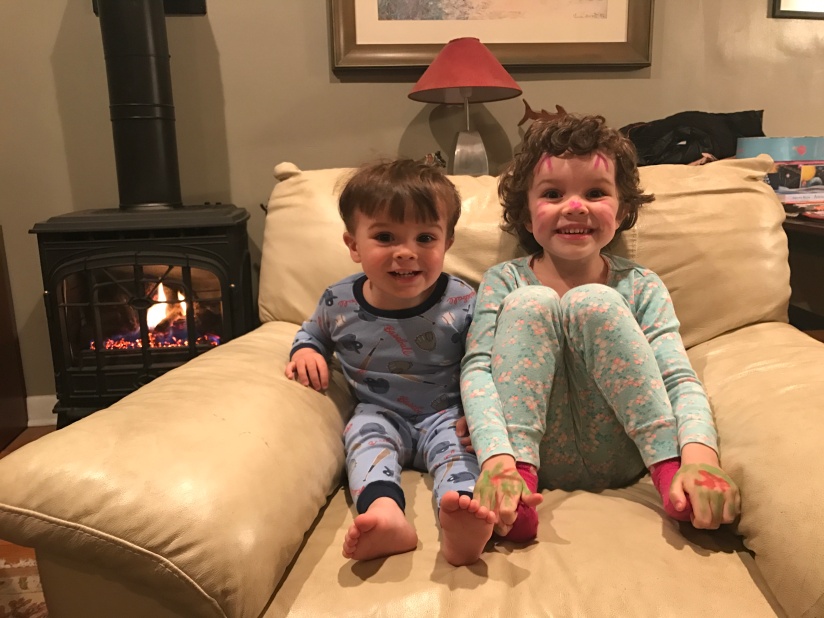 Disclaimer: I didn’t write this post to say that having two kids is better than having one, or anything else judgmental. Families of all sizes are beautiful. This is just what my family looks like.

For the past two years since my second child was born, I have been asking more experienced parents of siblings, “when does it pay off?” Like most parenting questions, I received a slightly different answer from everyone I asked. While I’d been certain of wanting another child, in the beginning it was hard. Naively, I thought “how could adding another be that difficult when I already have one?” The truth is that some things were easier (more confidence in my parenting abilities, less agonizing over every stage and decision) and other things were harder (our child-related spending increased, it was harder to find little breaks in the day, I went back to work sooner than with my first). Also, I’d placed unfair hope on my first child immediately taking to her baby brother. The truth is that a toddler might not be interested in caring for or entertaining a baby and that’s okay.

Now, as my youngest’s second birthday approaches, life with two has gotten easier and more rewarding. They play together more, invent imaginary worlds together, and everything his sister does, my son wants to do, too, in the sweetest way. As I enjoy this stage of life, I also find comfort for the loss of my own younger brother. This year was the first #siblingday I was able to enjoy on social media without feeling an ache in my stomach. Watching my own children play together has given me fresh insights on the sibling relationship, helping me relive memories of early childhood with my brother. Like my two, Rob and I were always together. He was an agreeable partner in all of my games and inventions. From playing school together to pretending to cross a hot lava pit on our swing set, my brother was my first best friend.

Of course, I viewed our relationship from the perspective of the firstborn, who loved her brother but also wished for a sister and, remembering a time before parental attention and resources had to be split, may have sometimes wanted to be an only child. Now, through my son, I see what it means to be the second-born, whose older sibling occupies a godlike position in the universe. The second child has never known life without his older sister. He has loved her from the beginning and she has always been a role model. He covets her attention as much as that of his parents. Everywhere my daughter goes, my son goes, too. Recently we were walking through the yard and I couldn’t see him behind me. I called his name only to discover he was right behind his sister–of course. Everything she does, he does; everything she has, he says, “I too, I too.” When she disappears from the room he looks around, plaintively calling her name.

I always knew my brother loved me, but now I see it and I am reminded of the A.A. Milne poem, “Us Two:”

I have long been resistant to suggestions (mainly coming from my much more time-aware husband) that I track what I do all day: how much I work, how much I sleep, and the rest of life’s daily shuffle. Why didn’t I want to know this possibly helpful information? Well, I like to take my time, I hate feeling rushed, and I want to feel like my days have room for the unexpected. But as every other parent knows, this isn’t really possible during the “rush hour years” of having babies and raising small children. Time becomes a precious resource, at least the time that you hope to have to yourself. So by the time I read Laura Vanderkam’s 2016 New York Times article, “The Busy Person’s Lies,”  I was more receptive to time tracking.

Still, as you can see if you do the math, it’s taken me two years to actually implement this strategy in my own life (after a few false starts and stops that summer). Like I said, I move slowly. Plus, it took me that long to realize I could use Vanderkam’s weekly spreadsheet (sign up for her email list to get it) on my phone with the Google Sheets app instead of the clumsier process of turning to my laptop to record my day in half hour brackets. For the past two weeks I’ve logged my time, though my focus is on sleeping, driving, and working, as those are the areas of my life I’m least aware of and could benefit the most from tweaking. I’ll start sharing some of my insights here, in case it’s helpful to anyone else.

Week One (3/26-4/1): Our routine was a little off due to my kids’ spring break from preschool. I didn’t work as much as I normally would on Monday and Tuesday. Still, I was shocked to discover I’d only spent about 21 hours on income-generating work tasks. (I receive a stipend for the classes I teach as an adjunct, so I count all teaching related hours from class prep to classroom time and grading. But for my freelance writing I try to be stricter in only counting the time I’m writing, not miscellaneous email/admin tasks, for example.) Just as Vanderkam’s article illustrates, I felt busy, but a 20-hour work week is nothing to complain about.

Right now I’m teaching four days/week at two different campuses, each about a 50 minute drive from my house. And my kids’ school, which they attend two days/week, is a 30 minute drive from home, adding more time to my teaching-related commutes on those days. Luckily, the obscene amount of driving I’m doing will come to an end later this month and I’ll be smarter about scheduling in the future now that I can see the hours in black and white. (Sure, I’m breezing through the audiobook version of Trevor Noah’s Born A Crime, but that still doesn’t make the great expense and time suck of two-plus hours/day of driving worth it.)

With my new realizations from Week One, I focused on finding more working time in Week Two. This had mixed results: overall I increased my work time by ten hours, but often at the expense of exercising and getting to bed early enough. Plus I’m just slow and error prone when I try to write at night. And as soon as I let go of my commitment to self-care, I started to feel very unhappy, which manifests as snapping at my kids and so on. The most successful part of the week was working for six hours on Saturday while my husband took the kids on an outing. So in the future I’ll look to the weekend to make up time instead of trying to work after the kids are asleep.

Do you track your time? Even if you don’t, I’d love to hear about your daily routines and tricks for finding more time in the week to do certain tasks. I geek out on other people’s time diaries and now I’m enjoying keeping my own.

Since I never posted a reading log for February, this list comprises the books I’ve finished since my January report.

That’s all for now. What have you been reading lately?

I haven’t kept a reading journal in a long time. Instead I let my bookshelves serve as a visual reminder of what I read. But after enjoying monthly book lists on other people’s blogs, I thought I’d try it here. My motivations are also selfish: I figure that sharing my monthly reading tally with the world will nudge me to do more actual book reading (as opposed to, you know, following a trail of article links across my Twitter feed). I’m already embarrassed about how short this January recap will be. END_OF_DOCUMENT_TOKEN_TO_BE_REPLACED